Example essay that deals in a few words with the topic of Peace. It is an argumentative literary essay with introduction, development, conclusions, and references.

Essay title: “Is it possible to achieve world peace?” 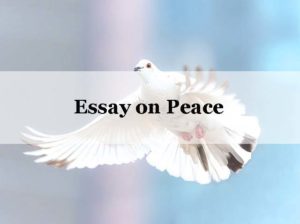 At present, a great number of warlike confrontations are developed in different countries around the world. On television and the Internet, you can see groups of citizens openly supporting the attacks of one country against another. This raises much concern for the future of man, since it is not known for sure if it is possible to achieve world peace.

Recent years have produced worrying figures related to innocent people who have died in the midst of civil wars. Also, there is a strong presence of terrorist groups that develop their activities regardless of the lives of women and children. In countries where there are such attacks, the population is prey of fear and does not understand how there can be so much cruelty. While many people in the Near East do not support this situation and end up fleeing from their homeland.

Peace is an issue that concerns every human being. It is not a problem that only politicians can solve, even less knowing the incapacity that many show or the many cases of corruption that come to light. To achieve world peace, we must begin with individual action. Aspects such as tolerance are essential for the peaceful resolution of conflicts, making it an attitude that we all must have and teach new generations.

On the other hand, the recognition of the rights of each person must always be demanded. It is a duty of every organism to respect the faculties and freedoms of individuals. Cases of abuse by the police, for example, should be made public. In this way, the population can be informed about the quality of life that it deserves.

Changing the mentality of the people, making them aware of these problems, is a necessary task. Not for nothing did the General Assembly of the United Nations reach an agreement that on September 21 of each year the International Day of Peace should be celebrated. A measure that aims to draw the attention of all people to reflect on it.

Reaching world peace is possible, but the road is not easy. Attitudes such as tolerance are basic to create a better understanding between people. While the ability to resolve conflicts in a peaceful way is fundamental both in individuals and in nations. Likewise, respect for human rights is essential. They should never be left out, under any circumstances. Nothing justifies it or anything will. The desire for peace must be born of each one, but we must also think about the next generations and how to influence them in this regard.