A micro essay is a short, direct, and clear essay. Despite the brevity, it has all the characteristics of the essay genre. A micro essay should not be more than one page in its wordings. 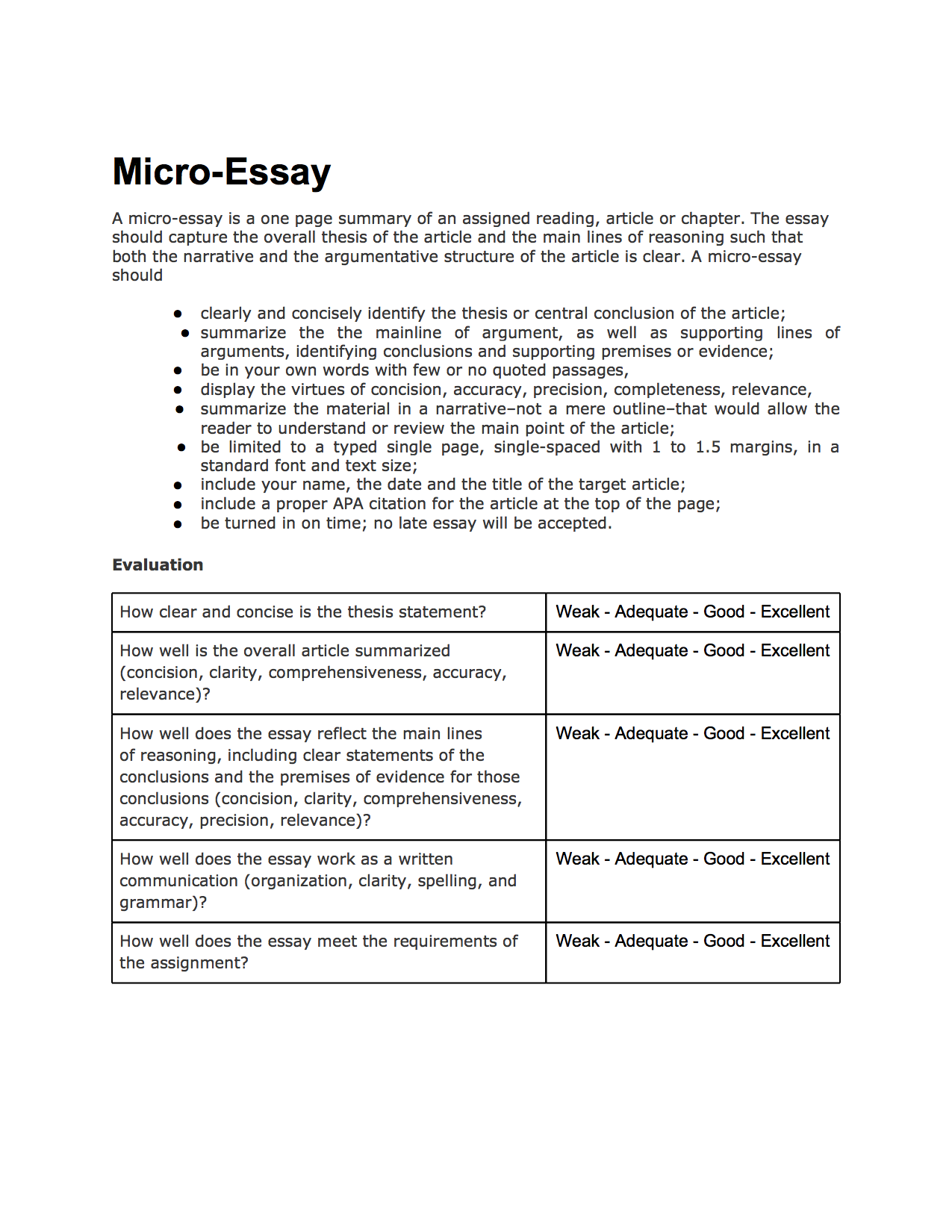 Why the word of micro essay?

The term micro essay is not registered in the official dictionary of the Royal Academy. However, that does not mean that it is not used.

Parts of a micro essay:

It consists of three basic parts, which are:

Introduction. It is the part where the subject is presented. The author is delineating the approach that will develop throughout his writing. Also in this part, it is possible to present the main thesis or ideal of the text.

Body or content: It is the central part where the arguments that support the author’s point of view are established.

Conclusion: the final part where the author reinforces his point of view and, perhaps, new questions are asked about it.

Characteristics of the micro essay:

–  It is free and personal writing.

– The author’s own voice is fundamental.

– Thematic variety. It can be about practically any subject or topic.

See also  How to Write a Persuasive Essay Step by Step

– The most important tool in any essay lies in the arguments put forward by the author to support his view on the subject that deals with it.

– The extension of a micro essay. As it is a short text, it is recommended not to exceed a single page in its wording.

An opinion article that is published in a journalistic medium, whether in digital or printed format, can be called a micro essay.

It is writing, generally, not very extensive, that explains the personal position or the arguments of the journalist about a current topic.

The campaign, where the isolated man has no other energy than his own, demands the use of the revolver to relate to the bandits and the beasts. The primitive instincts, which, like cruelty and cunning, we all enclose in a different quantity, are equally opportune, and the purely animal finesse of the ear and of the smell is also enviable.
When great centers were formed, in which the natural placidity of the customs added the courtesy inherent in the social game and the establishment of the police and the courts, it should have been expected that the revolver would be only indispensable to the travelers, to the commission agents, to the explorers, to the members of the army and the navy and to the assassins.

See also  Tips to Write Why I Deserve This Scholarship Essay

It did not turn out that way. Each one carries around their five lives in the pocket of trousers. The student, the harmless employee will not be able to buy a watch, but a revolver. The chic youngsters leave their Smith in the wardrobe of the dances next to the clack. Mature gentlemen go with artillery of deceived husbands or conspirators to read to the club their favorite newspaper. Lawyers, doctors and perhaps ministers of God are carefully armed when leaving their house. It breathes a tragic atmosphere. Heroes rub elbows. Mixed familiarly with the daily existence, the revolver is the end of the disputes, a gesture almost legitimate, an argument, and serves to put with bullets the points on the I’s.

It is respected the more so as it rarely hurts the one who points. Its merit is that it is awkward as Providence and that it turns a particular issue into a public risk. This crazy instrument, docile to the fugitive pressure of a finger, is preferred by the impulsive, the favorite of women and those unable to slap. As has been said profoundly, it equals the adversaries. It delivers strength, health, and balance to the hysterical spasm of a puny.

See also  What is a Critical Essay?

It has other advantages. The perpetual threat keeps fear among citizens. The reason is silent so that they do not machine-gun. The slander, sure not to be attacked, runs outdoors. The journalistic controversies are transformed into prudent collections of insults at a distance. The jury softens with the revolver and deals benevolently with the unfortunate cases. Thus a peaceful moral depression is preserved.

I think there are provisions against firearms. But the rigor of the laws resides in their compliance, and not in the letter. The courts respect the property right, which is confused, as far as the revolver is concerned, with the right to be shot.