Sample essay on Steve Jobs. This is an argumentative essay that tells us a little about the life of this genius of electronics and computer science and his versatility to enter the 21st-century market.

Title of the essay: “The vision of Steve Jobs and its impact on modern society” 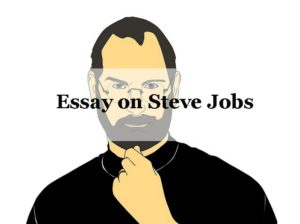 Today’s world is characterized by the daily use of smartphones to communicate, access the Internet and many other functions they offer. This is a reality that many times we take lightly, without realizing that it is the result of a series of advances and scientific discoveries. However, these variables are at the mercy of man, his vision being necessary to carry out any significant change in society. Although there is no doubt that there are many people who have contributed in this regard, Steve Jobs has become the perfect example of visionary, both in business and technology.

Its versatility to address the market remains praised by many people, as it was able to create a cult brand that brought with it a series of innovations. In this way, Apple has become the most important American multinational company in recent times.

It was founded by Steve Jobs and Stephen Wozniak, who did not hesitate to break the schemes with their first computer in the mid-1970s. Thanks to this device, there is currently a user-friendly interface, as well as the presence of a mouse to facilitate access to programs and tools.

Boosting the advancement of human beings was a goal of Steve Jobs, to achieve this he was always aware of social and cultural changes, adapting the business model that Apple had. In this way, he entered the music industry through the iPod, a portable digital audio player. But the real success of this decision was brought by a new way of acquiring music using the Internet, this is how the online store called iTunes was introduced.

Decades later the iPhone made its appearance, which became the first smartphone with touch screen available worldwide. This invention revolutionized the market and reinvented how people interacted with technology. This and other Apple devices always prioritized minimalism in their designs, a trend that has been adopted by other brands.

The decisions and products that were motivated by Steve Jobs show that he had an incomparable vision when changing habits and customs. His premature death at 56, caused by cancer, stripped the world of remarkable brilliance and passion. Not only is it an entrepreneur who achieved success in all its magnitude, but a man whose desire to innovate and enrich human existence has profoundly impacted modern society.

REFERENCES
– Michael Moritz. “Steve Jobs & Apple: The creation of the company that has revolutionized the world.”