Sample essay on sports. This is an argumentative essay that shows us how sports disciplines have lost their essence over the years.

Title of the essay: The reality of sports in today’s world 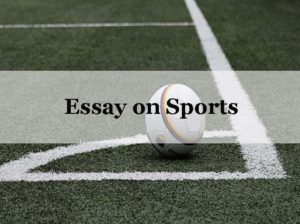 In every society, there is a need to carry out substantial changes, if required, or subtle modifications to improve the economic or political structure of a country. Also included here are new trends and collective and individual rights, which must be respected and adapted to each situation. In the case of sports, this is extremely important, so in this essay, I will seek to analyze its reality and the problems it is going through.

To better understand the reality of sports in today’s world, it is convenient to talk about one of the most popular in most countries. Football, also known as “the sport king”, has left behind its concept as mere sports discipline, becoming a business that moves millions of dollars. The players’ sign contracts to be the representatives of different products, often affecting their performance to avoid hurting their bodies, which happens to become a resource of incredible value for large companies. The same applies to television rights, which end up creating a war without quarter between the most important networks.

On the other hand are the secret clauses that are stipulated in many transfers, as well as the colossal debts that are created. All this results in an environment of dubious ethics, where the behavior of countless professional footballers becomes the role model of children and young people.

However, this reality can not only be seen in football, but there are cases in other sports. Such is the case of cycling, where scandals can be found that reveal a high consumption of illegal substances to improve the performance of those involved. One of the most famous is that of Lance Armstrong, who received great media attention for the different awards he had achieved.

Although there is no doubt that these problems result in more demanding doping tests, it is also true that they become part of an unnecessary spectacle that the public consumes obsessively. In this way, many sports are losing their essence as a discipline, and become products of a corrupt system.

In conclusion, it is inevitable that the most popular sports end up becoming negotiable merchandise, given the large volume of profits that are involved in its practice and promotion. However, it is necessary for people to be clear about this reality, not taking it as an example to follow and looking for it to improve progressively over the years.