This is a sample essay on abortion. It is an argumentative essay that talks about the decriminalization of abortion and its repercussions.

Title of the essay: “The importance of the decriminalization of abortion” 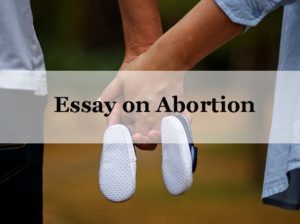 At present, especially in third world countries, the decriminalization of abortion should be considered as an obligation for each government. Involves an individual decision, far from social obligations imposed by religious dogmas or pressures media. It also represents an extremely important alternative in case of unwanted pregnancies that occur during adolescence or in condemnable circumstances.

People who are against abortion hide behind human rights and their religious beliefs. However, if analyzed from a scientific point of view, far from subjective opinions and pro-life fanaticism, it is clear that during the first days of gestation there is only one set of cells. It can not be considered properly a human being, because the only thing that it shares with us is the genetic code.

On the other hand, the number of unwanted pregnancies among adolescents is alarming. In Latin America, it is the product of a lack of education. Both on the part of schools, which have not structured courses in this regard, as parents, who do not teach their children the basics to lead a responsible and safe sex life. In addition, there is the pressure of the mass media, which bombard young people with suggestive messages without clarifying the possible consequences.

It is also worth mentioning the cases of rape. Where, aside from the fact that the pregnancy already has a considerable time, it should be the decision of each woman to choose or not to have an abortion. It does not have to be forced to continue in that situation if you do not want it, it is your life and you have the right to proceed as you see fit.

The problem of the illegality of abortion occurs when the aforementioned women do not have the freedom to choose, and they must opt ​​for a process that is not supported by a hospital or institution of trust. So, many times they themselves put their lives in danger, in the hands of unscrupulous people who only seek to profit.

In conclusion, decriminalizing abortion is extremely important. In the socioeconomic aspect, it may be the only option if the parents do not have the necessary resources to supply the unborn baby with basic needs. While in the case of unwanted pregnancies due to lack of education in young people or cases of abuse, abortion represents a right for every woman, since it is her opportunity to define her own life, and not be forced by laws or religions.