The following text is an essay that deals with the consumption of junk foods. The junk food, also called fast foods, can be defined as one type of food for your excess fat, low nutrient content and other ingredients, which can cause serious negative effects on the human body diet. Common examples are hamburgers, sausages or hot dogs, French fries. The commercialization of these foods is widespread worldwide, is part of diverse cultures, which, in turn, has greatly affected the way in which people decide to feed. Its excess consumption is usually related to the production of numerous diseases, such as obesity, type II diabetes, tooth decay, and cellulitis. 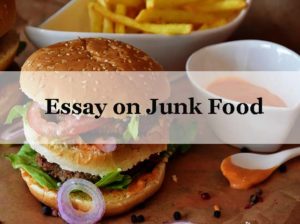 The body needs a daily intake of certain nutrients, proteins, and fibers. Junk foods do not meet the minimum of these elements to be considered healthy, on the contrary, or have it in very little quantity and added to the excess of other components that do not favor a healthy diet.

The problem focuses on the abuse. Eating them once a week does not produce the same harmful effects as eating them every day

Why are junk foods so successful?

The increase in the consumption of junk food is related to the phenomenon of globalization.

It is a cultural issue that has had a considerable expansion, especially since the twentieth century.

These foods have two important factors that drive their consumption: their easy processing and conservation, achieved after several industrial processes. To these factors, its accessible price is added. Many people do not have time to prepare their own meals and have no choice but to go to a restaurant.

The need to educate about the dangers of fast food

The best way to fight against the abusive consumption of fast foods is a strong awareness of the consequences it can produce for human health. Recent studies have shown that a large percentage of children are diagnosed with obesity, despite their young age. It is a clear example of how these bad eating habits have spread.

And here, the most important role lies in the parents. The food prepared at home is essential. The child must learn that not everything that he can ingest is beneficial to his body.

Fast foods attract for their flavor and popularity. Here we also see considerable work in advertising.

As pointed out in a paper by Dolores Cabrera, “the lack of time leads to the poor diet that is produced today in our society, with schedules that often leave only one hour for lunch. largely responsible for this lack of dedication to food that forces us to resort to fast food, although these causes are more concentrated in the worker sector, as young consumers turn to this food for its taste, appearance, and for its low cost”

Fast foods, simply, should not be a regular part of a diet. The consequences for health, if the necessary precautions are not taken, can be unavoidable.