Sample essay on justice. This is an argumentative essay that shows us the importance of establishing a fair system in governments to develop social and economic stability.

Title of the essay: Justice in the governmental structure of the countries 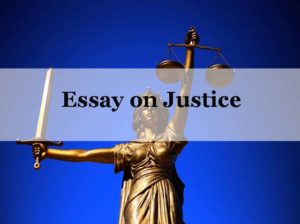 Justice represents one of the most important parts within the government of any country since it serves as the central axis to establish a democratic structure. In this way, each branch of public power can work independently, allowing for legal and institutional security. This makes it necessary to analyze the role of justice at the governmental level, which will be the central theme of this essay.

In the first place, it is indisputable that when there is no justice, or it is weakened for some reason, the problems experienced by a given country will increase. This is how cases of violence and abuse of power begin to appear, such as the lack of transparency in economic transactions and corruption. When this occurs, the population experiences a lack of trust, which is based on respect for institutionality. This affects the growth of investments, causing unemployment and altering social order and discipline.

The problem with this situation lies in the lack of impartiality that is perceived by citizens, whether they are officials or businessmen. The norms and laws that should apply to all only obey the interests of the ruling rulers, distorting the concept of justice, which becomes a tool that is manipulated by the political party with greater power.

Currently, one of the most common examples that can be found is related to the election of ministers and magistrates. There are countless cases around the world where these officials are chosen for clear favoritism or threat intervention. More capable people are disqualified through unethical strategies, and the reputation of the elect, even if they are not really involved in the aforementioned processes, is inevitably stained.

Justice should not be provided for the interests of any political faction, or for the benefit of certain power groups. When used to condition the members of the Executive or Legislative, impartiality is completely lost, affecting the stability of a nation and serving as an example for citizens to commit the same faults. This is something inconceivable and should be openly condemned through the media.

In conclusion, each government has the responsibility of putting justice in the service of its people, leaving aside private interests and not manipulating the laws in its favor. Only in this way will people regain confidence in the State, respecting and abiding by their decisions. It is a commitment that every country should prioritize.