Example of an essay on violence, This is an argumentative essay that informs us about the sad reality that many women live who are victims of both physical and psychological aggression.

Title of the essay: “The reality of violence against women” 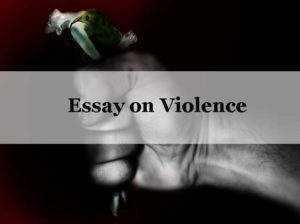 Years ago, violence against women was seen as a private problem. Making it public in some way was inappropriate, even unacceptable for a society that shielded itself in its conservative thinking. It was common for victims to suffer in silence, either due to abuse cases involving their partners or strangers. While women who did report these situations were seen badly and never found an empathetic response. This lasted too long, and still, a reality is perceived that refuses to change completely.

The male and female roles that were accepted by tradition have undergone a significant transformation in recent decades. In the European Union, for example, you can see a greater number of women who lead their lives independently. The tastes they want are given by their own means and occupy positions in different sectors of society. In large part, this is because human rights are no longer incorrectly defined by gender.

Despite all this, there are still cases of violence against women. It is estimated that one-third of the female population has suffered physical abuse or sexual abuse at some stage of their lives. This is alarming and morally unjustifiable. It is the product of a macho society that exalts man above all, motivating a condemnable action that is often approved by public figures. Something that not only affects children and young people of these times but will have a domino effect on future generations.

It is not an isolated problem that only involves a minority group; on the contrary, we are talking about half of the world population. Reason enough for nations to redouble their efforts in search of a solution.

Among the measures that can be carried out is a restructuring of the laws of the most affected countries. The victimizers should receive the full weight of the system, being punished in an exponential manner to serve as an example. Another form consists in the training of the police, which often shows an ignorant attitude on the subject.

The need to change this reality is irrefutable. You have to promote public debate and put aside the taboos that exist around you. Men, who in most circumstances are the cause of aggression, harassment and other despicable attitudes, must change their mentality and understand that nothing justifies violence against women.

Click to Find Latest Topics For an Argumentative Essay